An historian of early modern Germany (1500-1800), Marc Forster's last fifteen years of research has focused on the development of Catholic identity, primarily in southern and western Germany.

In his first book, The Counter-Reformation in the Villages, (Cornell University Press, 1992) he argued that the local people in the region around the city of Speyer remained loyal to the Catholic Church, not because they were forced to by their princes, but because they liked and supported traditional religious practices. 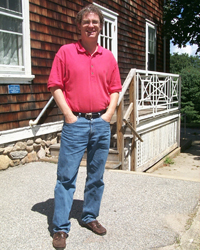 His second book, Catholic Revival in the Age of the Baroque: Religious Identity in Southwest Germany 1550-1750 (Cambridge University Press, 2001), expands his analysis of German Catholicism by detailing the aspects of Catholic practice — processions, pilgrimages, shrines, the liturgical year, daily services — which held the loyalty of peasants and townspeople. Furthermore, he argues that the common people played an important role in the development of Catholic practice and belief, either by resisting innovations or "reforms" imposed by the Church and state, or by initiating and promoting new religious practices and structures.

Forster’s third book, a general study of Catholicism in Germany from 1500 to about 1800, titled Catholic Germany from the Reformation to the Enlightenment, was published in 2007 by Palgrave Macmillan Press. This book synthesizes German, French, and English-language scholarship in this field and aims to make developments in the field accessible to students and to scholars in other fields. He presented some of his findings from this book at an international conference on the Holy Roman Empire at Oxford University in September 2006.

Forster is working on a study of conflict and conflict resolution in the German countryside in the period 1650-1750. One focus of this study is taverns, which were of course important places for social interactions, including both conflicts and peacemaking. Lower courts were another setting for conflict and conflict resolution and the records of these institutions provide the archival sources for this study. Rural people, rich and poor, women and men, sought out and appreciated institutions and structures that allowed them to resolve conflicts quickly and without too much expense. Lower courts, local in focus and often with juries of local men, provided this service and helped make people receptive to the development of state institutions in this period. Forster has published several articles out of this research and has several more in preparation.

Forster served as the President of the Sixteenth Century Studies Society and Conference in 2015.

Forster has earned a number of grants and fellowships, including a National Endowment for the Humanities fellowship in 2006-2007. A former visiting professor at the Ecole des Hautes Etudes en Sciences Sociales in Paris, Forster received a Guggenheim Fellowship, an Alexander von Humboldt Stiftung grant and a Fulbright-Hays grant, all funding research in Germany. Forster is fluent in German, French, Latin, and Swedish.

Professor Forster has also been active serving Connecticut College in a variety of capacities. He was appointed Director of the Toor Cummings Center for International Studies and the Liberal Arts (CISLA) in 2012. He chaired the Faculty Steering and Conference Committee (2008-2009), a member of the Dean of the Faculty Search Committee (2014), the Committee on Appointments, Promotion, and Tenure (1999-2005, 2014-), Presidential Search Committee (2005-2006), Presidential Task Force on Athletics (2001-2002) and the Presidential Commission on a Pluralistic Community (2002-2003). He was chair of the history department from 2001 to 2006.

Forster was awarded the Student Government Association's excellence in teaching award in 2011, given when a professor demonstrates an exceptional commitment to students.

He was designated the College Marshal in 2016.