Connecticut College's campus is a 750-acre arboretum with sweeping views of Long Island Sound to the south and the Thames River to the east. There are many points of interest. Here are a few favorites:

Dedicated in 1997, this garden, a gift from Susan Eckert Lynch '62 in memory of her mother, is a popular gathering spot for students. Names of Ad Astra Society members (supporters of the College who have given $1 million or more over their lifetime) are engraved on stone benches that surround a sundial fountain designed by sculptor David Smalley, Henry B. Plant Emeritus Professor of Art.

In the heart of the Arboretum, overlooking the pond, this rustic cabin with its charming porch is a popular spot for small, casual campus events. Back in 1932, the parents of Frances Buck gave her a $2,000 graduation gift as a reward for not smoking. She donated the money to the College to create the first Outdoor Theater, and her father was so pleased that he gave more funds to build and maintain the lodge for future students.

A gift to the College in 1960 by Frank Fasullo, this plaster bust is located in the foyer of the Toor Cummings Center for International Studies and the Liberal Arts, based in Fanning Hall. Exam-bound students touch it for luck.

A gift of Mary Stillman Harkness in 1940, Harkness Chapel is known for its wonderful acoustics. Its steeple is the highest point in New London and can be seen from throughout the city.

Connecticut College's first building, New London Hall, was named in honor of the citizens of New London who raised funds to help establish the College in their city. The historic building was transformed in 2011 and 2012 into a state of the art center for the life sciences and computer science. The building and greenhouse were fully renovated from top to bottom with leadership Campaign gifts from foundations, alumni and parents. 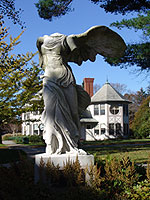 This small-scale replica of the Greek sculpture known as "Nike," "Winged Victory" or "Victory of Samothrace" is located between Jane Addams and Mary Harkness residence halls. It was a gift to the College in 1939 from Gilbert Lamb, a local attorney, whose property was damaged by the hurricane of 1938. Lamb wanted "Nike," carved of the same white Carrara marble that Michelangelo used for the statue of "David," to stand forever in a place where it could inspire others as it had inspired him.