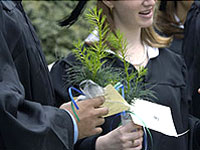 Connecticut College graduates are presented with Eastern White Pine (Pinus strobus) saplings which they carry as they march at Commencement. The sapling represents the tree on the College seal and symbolizes each student's continuing connection to the College. This tradition began with the Class of 1993, and was made possible thanks to the generosity of Athena Tsakanikas-Philippides '86. In 2012 Ms. Tsakanikas endowed the Konstantinos T. Tsakanikas Memorial Fund, ensuring that the saplings will remain a Connecticut College tradition in perpetuity.

The late Nobel Peace prize laureate Wangari Maathai, an internationally renowned environmentalist and peace activist from Kenya, acknowledged the College's unique tradition of giving each graduate a white pine sapling in her remarks as the speaker at the College's 88th Commencement ceremony in 2006: "That is absolutely fantastic," she said. "What individuals are doing to save the environment, that is important . . . not what governments do or don't do." 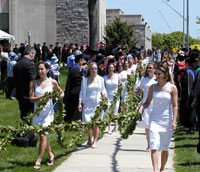 In the spirit of Connecticut College’s original founding as a women’s college, members of the junior and sophomore classes, dressed in white, carry chains of laurel to guide the graduates to the ceremony. Laurel was traditionally used as a symbol of honor and fame. The ancients presented laurel wreaths to university graduates in rhetoric and poetry. The laurel chain has been part of Connecticut College’s ceremonies since the first Class Day in 1919. 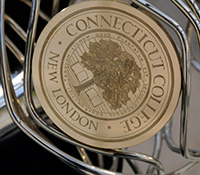 The College mace is carried by the College marshal on official occasions as a symbol of authority. The mace was a gift to the College from The Century Council, one of the College's giving societies, when Claire L. Gaudiani '66 began her presidency in 1988. Designed and fabricated by Richard Scheller '73, it contains brass sleeves with the names of the former College presidents.

A mace was originally a weapon consisting of a staff with a ball of steel or brass at one end. The word "mace" comes from the Latin mateola, meaning mallet. The mace evolved from an instrument of battle to a symbol of authority. In London's House of Commons, the sergeant-at-arms carries a mace over his right shoulder. When he puts the mace down, the session may officially begin. The session comes to an end when the sergeant-at-arms picks up the mace.